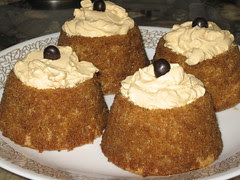 We're back in the Baby Cakes chapter for this week's Heavenly Cake Bakers cake-of-the-week, with a coffee-flavored chiffon cake. I used more of the Nielsen-Massey coffee extract purchased for Sybil's Pecan Torte a few weeks back, and I think I'm going to keep this stuff around given the great flavor it gives to cakes, and the number of coffee flavor addicts among the Folks Next Door.

The Coffee Chiffonlets recipe calls for mini angel food cake pans which I don't have, so I followed Marie's lead and used my 6-hole mini Mary Ann pan. These are a good bit smaller (about 2/3 c. instead of 1-1/4 c.), though, so the excess batter went into 3 Texas muffins. The cake preparation was straightforward (my, how far I've come from doing my first chiffon cake...), though it took a little ingenuity to figure out how to invert the cake pans without squashing my domed cakelets. The Mary Ann pan ended up balanced on 2 jiggers, and the Texas muffin pan got tilted to keep the cakelets more-or-less upside down. Once cool, the cake tops were brushed with a Kahlúa syrup, made with an ancient bottle of homemade Kahlúa. Then came the fun of extracting the cakes from the (ungreased) pans--the non-stick Texas muffin pans were no problem, but the old aluminum Mary Ann pan took a little work. Running the metal spatula around the edges then prying gently two or three places around the edge seemed to do it, and all the Mary Ann cakelets came out with their top depression (for holding the whipped cream, natch) intact.

For serving, the cakelets are topped with Dulce de Leche whipped cream--which is exactly that, cream with a few tablespoons of dulce de leche mixed in, whipped. I declined to make the dulce de leche from sweetened condensed milk, as the recipe makes over a cup (but only 3 tablespoons go into the whipped cream) and takes an hour and a half. I'm sure the small can of dulce de leche I found at Wal-Mart does not taste as good as the homemade stuff (though it only had a couple of "extra" ingredients over sugar and milk), but it was far easier to just reach for the can opener. I reduced the amount of whipped cream by a third, but probably will have to whip more for the leftovers even though I didn't pile a lot on each cake. I attribute that to having 9 cakelets instead of 4 or 6. Instead of the grated chocolate, I stuck a chocolate-covered espresso bean in the whipped cream.

Taste results: I really like this cake. Lovely light texture and great flavor in the cake, and enough fat in the whipped cream for good mouth-feel. The whipped cream is too sweet for me, though, and I would cut back on the dulce de leche by half, I think. Or perhaps make a lightly sweetened coffee or chocolate flavored whipped cream instead, even if it won't be as stable as the version made with dulce de leche. I delivered 4 cakelets to the Folks Next Door Saturday night, but no one ate theirs immediately to give me feedback. (Must work on training these cake testers!) Younger niece said it was good when she was raiding my fridge for her lunch yesterday, but made no further comments.