The Bread Bible: Classic Challah, or A Tale of Four Challahs

I've been baking challah every week for a number of years, since the frozen-dough challahs that my sister-in-law was baking every Friday for Shabbat (she and the kids are Jewish, I'm not) declined in quality and I started experimenting with recipes. One of the first I tried was Rose's Traditional Challah from The Bread Bible, back in 2007. My blog about it (on LiveJournal at the time) notes that I belatedly found the errata on Rose's blog, and also that this is a very large challah using 5 eggs. Perhaps because of the size, perhaps because we didn't find the results particularly great, I tried other recipes and eventually evolved my own Whole-Wheat Challah with Dried Cherries primarily from the base of this Grandma Rosie's Fabulous Challah recipe that I found by a general Internet search. Note that's Rosie, not Rose.... :)

Along came the assignment of Traditional Challah for the Bread Bible Bake-along, which I'm participating in as an ad-hoc member when time allows. The posting was due December 2 (amended to the 4th), and I jumped on things and baked it November 21 ...before I saw Rose's suggestion on our internal Facebook page suggesting we do the improved version on her blog instead. Due to the number of folks currently eating that weekly challah (the nieces are in college, my brother generally works late and isn't around for dinner...and frequently avoids carbs, so it's 3 of us: me, the nephew, and sister-in-law), a 1-egg challah is the preferred size, so I did the math and cut down the Traditional Challah to a 1-egg version.

I did a 6-strand braid per my usual habits, and the loaf looked very pretty.

Alas, just as in 2007, it was not a big hit--just didn't have any special character either judged on its own or compared to the whole-wheat and dried cherry version. This recipe uses an overnight or half-day starter for a flavor boost, but we still found it rather meh. 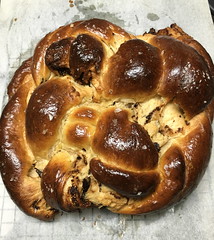 Challah over Thanksgiving weekend, with the nieces home, was Smitten Kitchen's Fig, Olive Oil, and Sea Salt Challah, because we didn't manage anything special for Rosh Hashanah. (I was at Walt Disney World, and didn't leave a frozen challah for the occasion.) Because older niece had had one of these delivered to her at college a couple of years ago, when younger niece jokingly suggested I could bake another one for her to take back to college, I did it. Therefore it's a tradition: nephew has been informed that he's entitled to one Fig, Olive Oil, and Sea Salt Challah during his college years. (He's a high school junior.) 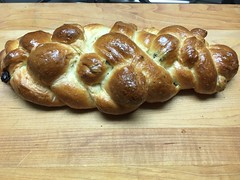 Finally we're at the week when the bake-along challah post is due, and I decided to give Rose's improved recipe a chance. This version uses a bigs, aged for 3 days in the fridge, for extra flavor and to make it keep better. Well, a biga or a chunk of firm sourdough starter, which I don't keep. Biga it was, so I made the biga on Sunday, and refrigerated it until Thursday night. I made the dough using butter instead of oil for a little more taste enhancement, let it rise, then split it in half and kneaded in plumped dried cherries. Half went into the fridge for the family Friday challah, and the other half had its second rise, got its 6-strand braid, then was baked for sister-in-law's Tickling Tech train-the-teachers session Friday morning. The braiding was a bit difficult--the dried cherries are a little large in the half recipe and with 6 ropes and want to pop out of the dough, but if you cut the cherries in half the cherry juices will stain the dough. I'm blaming the rather erratic look of the baked loaf on the cherries.

I baked the half-sized challah 15 minutes then turned it around, then another 20 min or so covered with foil for the last 10 to keep it from browning excessively. It smelled heavenly, one plumped cherry had artistically trickled some juice down the side....and I delivered it warm next door so s-i-l could take it to school the next day, where at least one teacher gave it thumbs up by asking for seconds. (No other comments were relayed.) My house was left with this heavenly smell of fresh-baked challah at 10:30 at night. Friday night I was finally able to taste it after baking the second half, and it's indeed a better tasting version than the Bread Bible recipe. The bread was moister, and a bit of tang from the bigs comes through. I'll keep baking my whole-wheat version weekly, but if I need a white challah this is a recipe I would turn to.