The Bread Bible: Touch of Grace Biscuits with Cherry-Chambord Butter 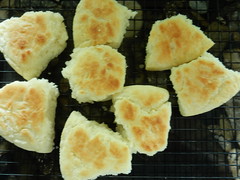 The Alpha Bakers' once-a-month bread baking assignment is the Touch of Grace Biscuits from The Bread Bible. The recipe is Rose Levy Beranbaum's adaptation of Shirley Corriher's Touch of Grace Biscuits from Cookwise. I was lucky enough to taste these biscuits as prepared by Corriher at a cooking demo at the Decatur Book Festival a few years back, where they were served with Cherry-Chambord Butter (also in Cookwise). I promptly bought Cookwise, but never got around to trying this recipe until now. For those who like cookbook authors who delve into the whys of recipes, I highly recommend Corriher's books.

The immediately apparent difference in the two recipes is in the amount. Cookwise uses 2 cups of self-rising flour, The Bread Bible 1-1/2. There's some difference in the amount of leavening, the details being somewhat confused by the instructions in both books for substituting all-purpose flour for self-rising. Side note: both books call for the very soft wheat (low protein) "Southern" flour, preferably White Lily brand. (OK, Corriher said that in the demo, not in Cookwise.) I live in Atlanta: White Lily is my standard soft-wheat flour, though I don't keep self-rising around. The ratio of shortening is the same in both books, but Corriher gives suggested amounts of buttermilk and cream for the liquid, where Beranbaum just says use either or a mix. The other major difference is in baking. Corriher bakes the pan of biscuits at 425 for 15-20 minutes. Beranbaum preheats the oven to 475, puts the pan on a heated stone or baking sheet and ups the temperature to 500 for 5 minutes, then decreases to 475 for the remaining 10-15 minutes. Both offer an optional brushing with melted butter, but Corriher does it after the biscuits are baked, Beranbaum before.

The part of this recipe that I haven't seen elsewhere is in the shaping. The dough is extremely wet--Corriher says it should look like cottage cheese, which was more apt to me than Beranbaum's "like mashed potatoes". You scoop out a biscuit-sized lump and dump it in some plain flour, then shape it quickly, dusting off excess flour, and put it in the prepared baking pan before it flattens out under its own weight. The whole pan must be shaped and gotten into the oven in a rush, or the individual biscuits will completely merge into a single large pan bread.

I thought I'd hybridize the two recipes, but my actual baking included more variations than I'd intended thanks to not checking the larder before I got started. I thought I'd bought self-rising White Lily, but only had all-purpose. I knew I had Crisco shortening in the fridge, but it had been there so long it had gotten a touch rancid. I really wanted biscuits the morning I baked these, so out came the butter. I used Beranbaum's smaller amounts and 8" cake pan (Corriher says either 8" or 9" for her larger recipe), used a rough version of the ratio of buttermilk to cream from Corriher, the butter substitution which is in neither source, baked using Corriher's simpler process, and brushed the melted butter (which thus didn't have to be cooled or clarified) on the biscuits when hot from the oven.

To accompany my breakfast biscuit I made a quarter recipe of the Cherry-Chambord Butter, which is actually more than half cream cheese, blended with butter, Chambord, powdered sugar, cherry preserves, and orange zest. The quarter recipe would have been enough for the entire pan of biscuits at the amount I used.

I was surprised at the amount of sugar in the recipe, as I think of biscuits as savory (though often served with sweet toppings like honey or syrups...or Cherry-Chambord Butter). I didn't find the result sweet, though, or maybe it was masked by the wonderful hot buttery biscuit flavor. The texture is very soft and fluffy--these biscuits won't do well as a base for a breakfast sandwich, as the biscuit will fall apart around the fillings. That's OK though, I think I'll manage to get these eaten up somehow. 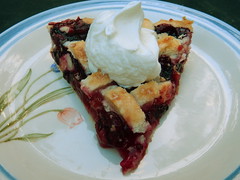 This week's Alpha Bakers assignment makes for two recent experiences baking with rhubarb, with my use of the rhubarb variation when the assignment was cranberry upside-down cake (I couldn't find cranberries), and now a combination blueberry-rhubarb pie. Also it's a second lattice crust shortly after I made my first one for the sour cherry pie in March.

I did make things harder on myself, though, by attempting to make a smaller pie than the recipe called for. I routinely half the Alpha Bakers recipes to avoid overloading the family (though my co-workers probably wouldn't mind having more arrive in the break room on Mondays), and since this practice started back during the Heavenly Cakes bake-through, I have a supply of 6" cake pans and a springform, the right size for half of a 9" cake. The issue of a half-sized pie has only come up for black bottom pie at Thanksgiving or Christmas, and it's a 10" deep-dish pie that works well in a steep sided 8x3 tart pan. I have mini pie pans (3-4"), but nothing in the 6" size. My options were the 8x3", or a pottery 8" pan with pretty straight sides with a scallop at the top. This last is what I decided to use.

Because my pan is bigger than a half-recipe needs, I took a hybrid approach. I made the cream-cheese crust for a 9" pie with a full double-crust or a 14-strip lattice, instead of the called-for 10-strip lattice amount. That still was a bit short for the pie pan. I made 3/4 of the filling amount, and that gave me a little more than half-full pie pan. I then mashed and folded the crust down to the level of the filling, so I really did have enough pie dough after all. The combined effect is rather like a tart, so I guess it all worked out. If I'd predicted that result, I'd have turned to the tart pan collection in the first place.

Pan sizes and math for a 3/4 recipe aside, this is a pretty easy pie. All the filling ingredients macerate for a while, then are brought to a boil, simmered for a minute, then cooled completely. Dump that in the crust, deal with the lattice top (or not), then refrigerate at least 30 minutes before baking on a preheated stone.

Taste tests were conducted by me, the nephew-next-door, and my sister-in-law, with uniform thumbs-up on the pie. (The leftovers will be held in the fridge until the 2 nieces arrive home from their colleges on Wednesday.) I think we all felt it had good blueberry flavor with the rhubarb primarily serving to cut the sometimes over-the-top sweetness of a pure blueberry pie. Sister-in-law thought the bottom crust was overbaked, but I disagree--I wonder if she got a spot where the juices leaked through and formed a hard spot.