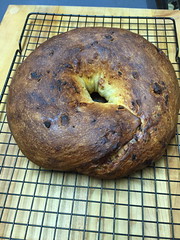 I have dropped out of the official Alpha Bakers group due to a lack of time and energy for the more complex recipes, but will be baking along with them on some weeks. I do intend to keep up with the offshoot baking through The Bread Bible, though I may jump ahead of their once-a-month schedule sometimes if the bread baking urge is upon me. I'm a couple of days late getting my bread post up, but I'm glad I didn't skip this one, as it was easy and tastes wonderful. The basic concept is a rustic white bread with prosciutto and cracked black pepper mixed into the dough, and is Rose's recreation of a bread from a NYC bakery called "lard bread". My copy of the Bread Bible is an earlier printing, and though the anecdote about lard bread is in the headnote, the recipe contained no lard. This got even more confusing as the internal Facebook for the bread bakers discovered that some people's recipes had lard, and more meat, and different kinds of meats. The confusion finally settled after finding a blog post from Rose that explained she had revised the recipe for the 4th edition based on more information about what that NYC bakery bread really contained. Her revised recipe adds 2 tablespoons of lard to the bread as a fat, then uses 6 ounces of mixed prosciutto, spicy soppressata, and pepperoni. As I'm a carnivore, 6 ounces of mixed cured meats sounded better than 3 of prosciutto alone, so I went with the revision. My limited grocery run failed to find spicy soppressata, so I decided that a mix of prosciutto and Spanish-style chorizo would maintain the moniker of "prosciutto ring" and still have the spicy taste of a pepperoni/soppressata blend. The recipe wants the prosciutto sliced not too thinly, but the line at the deli counter was long so I bought the regular packaged stuff. I considered buying a package of lard, but I use it rarely (for pie crusts, and not always) so decided bacon grease would be an acceptable form of pork fat here--no issues with the flavor difference, and any texture difference could be compensated for in the kneading. I went with the food processor version as the speediest, and it's indeed very easy. The dry ingredients all go in with only an intermediate mix to keep the salt and yeast from direct contact, then the fat and cold water. Let it come together then run the machine for 45 seconds to knead. Dump it out onto a floured surface and knead in all the chopped up meats, let it rest a bit, then form into a ring.

Let rise for an hour, then bake in a very hot oven on a stone and with steam. This was the first time I can recall using a silicon bread mat directly on a stone, but it worked fine, as did the transfer from the mat to direct baking on the stone half-way through. The bottom got a bit too brown, though, so I think I'll bake on the mat throughout next time. 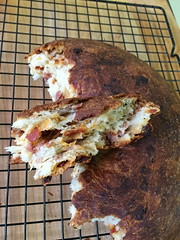 It being suppertime when the bread came out, it didn't get a proper cool-down before I tore into it for sharing with sister-in-law and for my own dinner. The taste was great, and I think the bit of gummy texture was a factor of warm-from-the-oven bread, not under-baking. I'll be repeating this one--it will be good with a salad for a lighter meal, and will be very good with soups, too. I may try the mixer version next time to see if that makes incorporating the meat easier, but it really wasn't too difficult to do by hand with the food processor version.