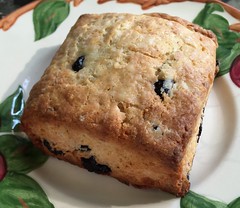 The name is deceptive...or incomplete. Yes, these are flaky scones made with cream cheese, but they are also "lemon blueberry scones", having a good tablespoon of lemon zest and lots of dried blueberries, and that's how I think of them. I guess "flaky cream-cheese lemon-blueberry scones" would be a bit long.

I've been using the technique of grating frozen butter as the first step in recipes that cut in butter with the goal of a flaky pastry--pie crusts (Peach Galette writeup will get done sometime) and the like, and these scones. The cream cheese got cut in with a pastry blender, then I grated in the frozen butter and popped the entire bowl into the freezer for a few minutes to let the butter chill again. (Warm hands!) Then I tossed the mixture together and pressed the butter shreds into flaky pieces. In went whipped cream and a bit of honey, and the mixture was done. Instead of wedges cut from a circle, I made a rectangle of the dough and cut square-shaped scones from that. (I do the same with biscuits most of the time--saves on re-rolling scraps from a biscuit cutter.) The entire batch went into the freezer, one wrapped separately for me, and the rest for the folks next door. I baked mine about a week later for a weekend breakfast, and thought it was wonderful. My dried blueberries had been pretty plump to start, and had nicely re-hydrated to give a nice flavor and texture to the scone. My sister-in-law baked the rest the week she had all the kids home, before younger niece left for college, and took the rest to her school for a Friday morning Tickling Tech session. She cut the ones destined for school in half when they came out of the oven, and said it worked very well. (I'd have cut the frozen ones before baking, but then I have a very large chef's knife to handle that sort of task.) I don't recall specifics, but I think the audience at Tickling Tech was appreciative. I'm filing away this recipe as one to make ahead and freeze so sister-in-law can have them available for weeks when neither of us can bake.