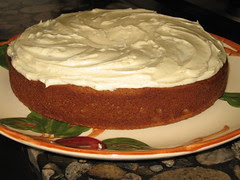 Perhaps those very ripe bananas, thrown into the freezer, um, quite some time ago, were a little old. They smelled OK--still banana-y, but the texture might have broken down just a tad. Or something.

The banana refrigerator cake is an oil cake, made with crème fraîche for moisture, along with those bananas. First the bananas and the crème fraîche go in the food processor to get a smooth mixture--I had a thin liquid after this step, which was not a good sign. The eggs and vanilla are added, then the mix moves to a stand mixer to be beaten with turbinado sugar, the oil, then the dry ingredients.

My batter stayed thin--I didn't need to smooth it with a spatula as directed, because it was too thin to hold an uneven surface. Baking went fine, though it didn't rise a great deal, and it seemed done after the minimum time of 30 minutes to both the finger test and a skewer.

During cooling the middle sank, giving a sort of 'trying to be a Bundt cake' impression. I frosted it anyway with the fabulous white chocolate frosting, piling all the frosting on top as Rose suggested, and following the contours of my fallen cake.

Looked very pretty at that point....but alas, on cutting, the fallen part was the texture of unbaked batter, with the banana slime factor in play.

Undeterred, and not willing to let a banana cake go, I cut out the middle and we ate the outer ring. In fact, after the first tasting round, I salvaged the white chocolate frosting from the middle and frosted my "half-ring" cake to protect the insides from drying out in the fridge.

Verdict: forget the slimed middle. The banana cake was really good, and the frosting was a perfect accompaniment. High marks all round for this one.