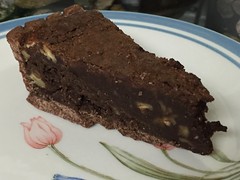 I managed to bake along with Rose's Alpha Bakers this week as they tackled the Fudgy-Pudgy Brownie Tart. This is a shallow (1" deep) tart using a chocolate cookie crust and filled with a brownie. The recipe calls for good-quality chocolate in addition to good cocoa powder and some white chocolate. I had 'good' white chocolate and cocoa, but my stash of unsweetened baking chocolate was depleted, and I had to fall back on supermarket Bakers unsweetened chocolate.

The chocolate cookie crust was pretty easy to work with, though that perfect temperature for it to be pliable for the rolling and shaping tin a tart shell eluded me. I used the full procedure used throughout the book of cutting a 12" circle, placing the crust over a smaller cake pan and trying to smooth it into a bowl shape--but here the crust cracked a good bit, requiring patching lest it fall apart before I could invert it. Then the tart pan goes on the assembly, and it is inverted to get that bowl-ish shape into the pan for the finishing work of pushing it into the sides, patching other cracks then folding, trimming, and decorating the edge. And yay! the tart crust doesn't need to be blind-baked before the brownie batter is added. I baked my tart for the maximum time as it didn't get to the stated temperature until then. Repeated checking also accounts for that largish hole in the center of my crust, where I angled in my instant-read thermometer multiple times. I think perhaps I would have done better to pull it out a bit earlier and kept the tart more towards the fudge side than it ended up. The results went next door to sister-in-law so she could take it to school for Tickling Tech, her regular Friday morning teach-the-teachers-technology session...but she'd forgotten to tell me that it was a teacher work day, and thus no regular Tickling Tech. Instead she gave a short talk to the full assembly of teachers (on copyright law), then gave a promo for TT using the brownie tart as an example treat. She then sliced it thin and put it in the library for teachers to come by for as they wanted around lunchtime. She said people seemed to like it, with a few comments on the crust as a different element. Didn't sound like there were any exceptional reviews, though. That's my personal feeling too--the crust is an interesting difference, but my piece, eaten cold from the fridge, didn't seem unusually fudgy. It was nicely chocolatey, but perhaps because of the thin layer of real brownie, I would opt for a classic brownie in the fudge, not cake, category. Maybe a higher-quality baking chocolate would have helped. I do have a bit of chocolate crust left over to experiment with. Some sort of tartlet, definitely...