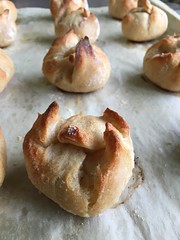 A sacaduro is a roll of Portugal, or maybe Brazil, or maybe this version is an American incarnation from those roots. No matter the origin, this recipe from Beranbaum's The Bread Bible is a small roll formed around a little cube of butter and fleur de sel, and baked to a crusty bun. The crisp hard crust is the defining characteristic of sacaduros. This one also has an interesting shaping method aimed at producing 'petals' in the finished bun.

This version starts with Beranbaum's Basic Hearth bread, which is made with bread flour (for a good chew) and a bit of whole wheat flout. The sacaduros recipe calls for a 3/4 recipe of this--too much math for me that day, nor did I want to have to bake the remaining 1/4 of the dough into something else if I made a full recipe. I went with a half recipe, got something over the weight of dough I expected, and made 12 rolls slightly larger than the weight given. (The 3/4 recipe was supposed to yield 14.)

The recipe wasn't clear on how far one was to take the Basic Hearth Bread before moving to the Sacaduros recipe, but as sacaduros appear to be all in the shaping, I took the Hearth Bread though the 2 rises and up to its shaping. To make the sacaduoros, you grab a ball of dough, flatten it, put a small cube of butter and a bit of salt on it, then pull out the sides and fold them over the center, gently pressing down. If you press too hard, the dough may seal and then not open into petals. Too gently, and it will unfold before you can bake it. After 3 rounds of pulling out opposite sides and folding them over, the roll is upended into a bed of flour to get a contrast of flour-dusted and not areas. Then the rolls go into the oven without any rising time using the usual technique to add steam, and they are done. 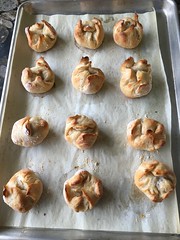 Instead of filling a large flat pan with flour (and putting the leftover back in the bin), I used a cereal bowl to hold my flour, dipped each roll as it was shaped, then put it on the baking sheet. The recipe has you leave the rolls upside down in the flour bed as you finish shaping the others. I'm not sure what difference that would have made, but mine came out pretty well in the shaping department, with only 1 that really didn't unfold and another unfolded partially. And I had a lot less loose flour to deal with!

I worried about the points burning and covered the pan loosely with foil after 10 minutes, and that might have kept me from getting really golden brown on the body of the rolls. I also didn't get a great contrast between flour-coated parts and bare dough, which might either be the flour not adhering well or again the limited browning.

Appearance aside, this is a good-tasting roll, with rave reviews from everyone who got one. The butter leaked out a bit to have each roll sitting in a bit of melted butter, and the interior still has a nice buttery taste. The buns have a good crust as well, and a fairly light interior. I can see trying different compound butters in this recipe, starting with garlic butter.