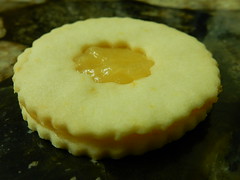 After last week's elaborate multi-layered cake with buttercream, it was nice to turn to a pretty simple cookie. Lemon Jammies are a sandwich cookie of lemon-flavored dough, with several filling options offered. The recipe that accompanies the cookie recipe is a lemon neoclassic buttercream, which involves the dreaded (by me, at least) hot syrup drizzled into eggs. Not going there this week.

I went with the simplest option, using a good brand of jarred lemon curd as the filling. I'd though to look around at the collection of jams and jellies in the fridge, but got into a groove with the lemon curd and used it for all of them.

I did a half batch of the cookies, and used the food processor method as both simplest and most likely to work for the smaller amounts of ingredients. The dough needs to rest at least a couple of hours to let the flour evenly absorb the moisture, and I gave it an overnight rest. Rolling the cookies out was pretty easy, though a few cookies got too soft or otherwise stuck a bit to my rolling mat, ending up a bit misshapen. I'm not in a perfectionist mood this weekend, so those got baked as long as I thought I could match a cookie half to them.

My lemon curd application was rather on the abundant side--reviewing the recipe now that I'm done, I see it says use a heaped half-teaspoon per cookie. My cookies were a bit smaller than the suggested size, and I probably put a full teaspoon or more on most of them. These may be a bit gushy to eat.

Tasting verdict: a very nice cookie. After an overnight rest with the lemon curd filling in place, the cookies softened quite a bit and only had a bit of crunch left. I think I'd call 24 hours about the limit before the cookies would be completely soft and, I suspect, lacking without at least some crispness to contrast with the filling. Tastewise, everyone who tried them loved the bright lemony flavor. 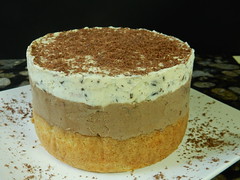 The Polish Princess is a composed cake made up of a genoise base that's brushed with a tea-vodka-lemon syrup, then topped with two layers of pastry cream-based buttercream. One layer is blended with cocoa and has sliced walnuts (or pecans, for me) folded in, and the other has chopped raisins (I substituted dried cherries) and chopped dark chocolate folded into a vanilla base. I made a half-sized version with my 6-inch springform. With binder clips (almost as useful around the house as duct tape), I got my silicone Rose-branded cake strip to work on the little pan.


On the advice of another Alpha Baker, I made the pastry cream first so it could cool--it needs to be the same temperature as the cool room temp butter to make the buttercream. Then I turned to the genoise.

The meringue, base of the genoise, gave me some trouble. With the half recipe, the KitchenAid stand mixer wasn't doing well with beating the egg whites, though they eventually got to soft peaks. I slowly added the sugar...and the mixture never got to stiff peaks. It was glossy, sure, but lifting the beater just got me white strings. I started over, having excess egg whites around (the pastry cream uses yolks only), and the hand mixer. Same problem. I quickly googled to verify that once you've added all the sugar it's pretty hard to overheat a meringue, so I just kept beating. Eventually some amount of body developed in the meringue that might have held a peak, and I moved ahead with the rest of the genoise, beating in egg yolks, folding in the flour mixture, and then folding in a small amount of water. The resulting cake looked just fine.

Sponge cakes generally get brushed with syrup to keep them moist, and the syrup here is a strong tea mixed with a little lemon juice and a healthy slug of vodka. The cake got skewered to help this soak in as it was brushed on the top and bottom.

The pastry cream became buttercream by beating it into softened butter, then was divided in half and the flavoring were added. The cocoa-pecan layer got spread on the cake, now back in the springform ring to support the buttercream layers and with a parchment collar to give it a bit more height. Into the fridge to chill and firm up, while the other half of the buttercream stayed at room temperature so it would remain spreadable. Once the cocoa layer was firm, the cherry-chocolate chip mixture went on top with only a slight bit of unevenness in the layers, and a little rim where I pushed up against the parchment collar. I grated chocolate on top with some spillover on the serving plate for artistic effect, and the whole thing went back in the fridge to chill overnight and meld the flavors. After careful removal of the springform ring and paper collar, then some smoothing of the parchment wrinkles with a hot spatula, I had the completed Princess.

Taste testing comments: I couldn't find any of the flavors I knew were in the syrup for the cake: no tea, vodka, or lemon came through. Sister-in-law and nephew agreed, no particular flavor to the cake. Overall I thought it didn't meld together as a cake--it was hard to get a bite with all three layers, and when I did, I still tasted mostly the chocolate-pecan buttercream. The butter creams independently were fine and not excessively buttery as I'd feared, but it was rather a mish-mash of components.

Sister-in-law and nephew found the cake too sweet but good. She liked the chocolate layer, but hit a large piece of cherry in the first bite of the vanilla buttercream and that dominated the flavors there. I took the remainder of the cake to the office but didn't have time to pass it around in person, so feedback was limited to the one co-worker who stopped by my office to say it was wonderful. She especially liked the cherries. [Later edit] Another co-worker stopped by my office Wednesday evening to ask if I'd made that cake he'd had on Monday. Two pieces, it turns out--he'd gotten one and taken it to his office, then came back. He loved the flavors, agreed there was no tea/lemon/vodka taste in the genoise, and did find it a bit top-heavy with the ratio of cake to buttercream. Clearly he still enjoyed the cake. [end edit]

One further note is that I never got a clean slice, even using a hot, clean knife blade. Perhaps the combination of the cherry, chocolate, and pecan bits in the buttercream, and the 6" cake, made slicing more difficult. 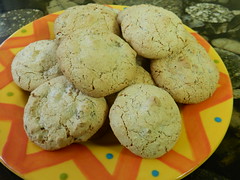 The weekly Alpha Baker's assignment, selected with a thought to Passover, is Dattelkonfekt. Rose gives the translation of Dattelkonfekt as "Date Confections", but I mostly called them "date-nut meringues". This is a pretty easy recipe as long as you have a food processor and a mixer...and a dishwasher. Oh, and if you don't care about having the back oblaten (edible wafers that can be used as the base of the cookies) and can skip the local search or the ordering from online sources.

Then chopping the dates.

Then mixing the two evenly. All that was accomplished with the food processor.

Turning to the stand mixer, some of the egg whites that have been accumulating in my freezer from earlier yolk-heavy recipes got beaten with lots of sugar to make a meringue. Mine actually did hold peaks, though the recipe said not to expect it. Then the two components got folded together and piped in little mounds onto parchment paper in lieu of back oblaten. Confession: I checked Amazon to see what they were and the cost, and decided I didn't care about adding that bit of authenticity, as it seemed pretty sure to not add any flavor or desirable texture. Parchment paper worked just fine, though without the wafers as a guide, I think my dattelkonfekt were a bit smaller than the intended size.

This is not my sort of cookie, though with the almonds it's a great improvement over a pure meringue that's (to me) nothing but sugar. The dates add more chew but not much flavor, but overall it's not a bad cookie. I sent about half of them next door, where sister-in-law carried most of them to Arizona when she visited over Passover. I took the rest to my office (labelled as "OK for Passover", which then led to the goy (me) trying to explain what makes some thing Kosher, then Kosher for Passover). For those who liked cookies in the meringue class, this one went over well--several people took one then came back to ask for more, always a good sign.