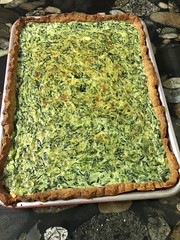 I've joined another baking group, the Avid Baker's Challenge, enticed by the fact that this year they are baking from the Smitten Kitchen blog. First up is the Sheet Pan Spinach Quiche, a recipe I'd seen and immediately saved to Paprika (the recipe app I use). I was attracted by the form factor--it's baked in a quarter sheet pan, so the ratio of quiche to crust is lower. The quiche filling is different, too--instead of milk or maybe half and half in the custard, this one uses cream cheese thinned with half and half.

For the crust I went with food processor mixing, though I used a technique from Serious Eats where I blended half the flour with the butter thoroughly, then added the rest of the flour and pulsed a bit. Then it was on to the cold water, and a dry-ish dough formed. I chilled that overnight before trying to make the actual crust. Deb Perelman of Smitten Kitchen warned that the crust is hard to handle for the quarter sheet pan, and recommended pressing it in. I was headed for the "press it in" approach, but having a chilled block of dough it didn't seem like I could get it into the pan only by pressing. (In retrospect, maybe I should have chilled the crumbly mixture from the food processor and then been able to spread that around the pan more easily.) I decided I would start by rolling my dough block to about the size of the pan between sheets of plastic wrap. That sort of worked, but it was very hard to get the dough well distributed until it was so warm it was turning greasy. Ultimately I chilled it again, pried it out of the pan (along with the parchment paper lining the bottom), rolled it out to get it sort of even and sort of the right size, then put it back in the pan and kept pressing. Result: pastry covering the pan, but not pretty.

The completed crust was chilled and blind baked, where I let it get too brown due to a little inattentiveness in the last few minutes as I was working on the filling. I made a shield for the crust before baking the filling and thought the results were just fine.

For the quiche itself I intended to use gruyere for the cheese, but ran out and filled in with cheddar. Everything else was as the recipe was as written. I was glad to have the weights for the cheese (actually for everything as I now bake mostly by weight), because my Microplane-grated parmesan was more than double the volume the recipe mentions. I had bought a nut milk bag recently to use for recipes that need to squeeze extra moisture from veggies, and discovered that too much twisting of the nut milk bag will pop a hole in it, alas. Deb said there might be too much filling for the crust, but mine fit nicely and was not even that full.

Results: The crust was nice, though not particularly flakey after its rough time getting into the pan. I like the filling including the cream cheese, and may try this style quiche with some other flavors--I like spinach OK, but this is pretty intensely spinach. Any future attempts will probably use a different crust, though!