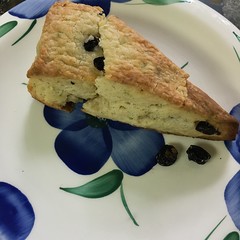 The June recipe for the Bread Bible bake-through is Flaky Scones. These are a rich biscuit dough which is folded several times before cutting to get flaky layers, as in a rough puff pastry dough. The recipe calls for currants, which I didn't have on hand and which probably wouldn't go over well with the raisin-averse folks next door. What I did have was some rather aged dried blueberries, which seemed like a good substitution in terms of size. I plumped those in a bit of hot water to compensate for their long time in the back of the fridge. I had looked at Rose's suggested variation of a lemon poppyseed scone, and decided that adding lime zest with my blueberries would be a nice cross-fertilization of the base recipe and the variation. I made a half recipe--sister-in-law's school term is over, so no need to bake for her classes for teachers.

As is my usual approach these days, I grated frozen butter with a box grater instead of cutting the butter into lumps then rubbing or pressing it into flakes. As someone with warm hands and a generally warmish kitchen, anything I can do to minimize handling pastry dough is to the good. I then put the grated butter back into the freezer to firm back up before incorporating it into the dry ingredients. After tossing the butter and flour mixture together, it looked like the butter pieces were already at a good size for this recipe, so I proceeded to add the heavy cream and mixed to get a dough.

After a bit of hand kneading to get the dry bits incorporated, the dough got turned out onto a lightly floured mat and shaped and rolled into a rectangle. That got folded into thirds, then rolled again, folded, and repeat until the dough had been folded 4 times. At this point it was definitely softening, so I wrapped it up and popped it into the fridge.

After a good chill, I finished getting the dough to about a 12 by 4 inch rectangle, then trimmed the sides (saving the scraps for a misshapen biscuit-like thing), and cut 8 triangles. After calculating the Weight Watchers SmartPoints on those, I now wish I'd gone with smaller ones--these babies come out at 17 or so points each, when my daily allotment is 30. I've already passed most of the batch, frozen and wrapped and with baking instructions, to the niblings next door.

Several days after making and freezing the unbaked scones, I baked one in my toaster oven where it took just about the time recommended for a regular oven without being frozen. (My poor scone had a bit of an accident between oven and cooling rack, developing the fracture you can see in the top picture.) I had a tough time only eating half of it--it's rich and crispy, and the dried blueberries worked well. My nephew and I both agree that the lime zest could be increased--I think I used less than the recommended amount due to measuring difficulties. There's a hint of lime, but we'd like a little more punch from it.