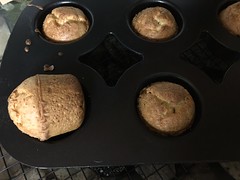 I stumbled across another Internet group baking through one of Rose Levy Beranbaum's cookbooks the other day, and while I haven't decided to ask if I could join them, it did get me to pull the cookbook Rose's Melting Pot off the shelf and look at their recent assignments. The popovers caught my eye--I've made popovers several times with good success, and this one riffs off the basic recipe to use beef fat instead of butter for a Yorkshire pudding taste. I didn't see the need to buy and render beef fat when, like a good Southern cook, I keep some bacon fat around. I tried a few other changes too, and apparently went too far as my popovers didn't "pop". I wanted a cheese and bacon flavor so added 2 tablespoons of cheese powder, and a small amount (under a half an ounce) of finely grated Parmesan to the batter. I suspect the problem was the cheese powder messing up the hydration ratio, as popovers need that blast of steam to expand dramatically.

Anyway, I have some lovely browned items that look sort of like tall muffins, with slightly doughy centers. The bacon-y flavor is great, but the cheese flavor was lost. I should have skipped both the cheese powder and the grated Parm given that. Not to waste my effort, I split one popover, pulled out the doughy bits, and filled the cavities with scrambled eggs. The casing is not a good popover crust, but it still serves pretty well as a pastry case. This same recipe will show up in The Bread Bible bake-through eventually, so I'll give it another shot then.