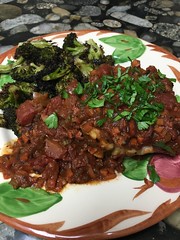 I'm not sure I've ever eaten chicken cacciatore before--I don't recall it being in my mother's repertoire growing up, nor do I recall ordering it in a restaurant. Maybe it was on some school cafeteria line many years ago? Well, if I've ever had it before, I've forgotten. This is another recipe tried under the influence of the group cooking through Rose's Melting Pot, published in 1994.

Chicken cacciatore: it's a stovetop dish of chicken pieces cooked in a tomato-based sauce. No, that gives the wrong feel for the sauce--it's a mixture of chopped veggies bound together with tomato. The first impression is the tomato, but the carrots and celery add their own character. The recipe called for a whole chicken, but I went with a pack of 4 bone-in thighs for the convenience, number of servings, and the way you really have to work at it to overcook them.

The recipe begins by by browning the chicken well, and I used just a drizzle of olive oil instead of a mix of butter and oil, knowing that my skin-on thighs would give up lots of fat quickly. After the chicken was browned it came out of the pan, any excess fat was to be removed (I had less than a tablespoon so kept it all), then in went chopped onion, carrot, and celery. That got sautéed until brown, then a minced clove of garlic was added with another minute of stirring. Then the recipe calls for a can of plum tomatoes, a small can of tomato sauce, and a bay leaf.

I used diced fire-roasted tomatoes instead of the whole plum tomatoes--that might have given me less liquid than whole tomatoes, but never having made this before I can't be sure. The sauce simmered uncovered for 20 minutes before the chicken went back in along with some wine, wine vinegar, and a bit of sugar, then another 20 minute simmer, covered. My smaller thighs were done at that point, but the larger ones needed another 5-10 minutes. A bit of chopped parsley and a basil leaf (plucked off the poor plant I transplanted yesterday) chiffonade for garnish, and I had a lovely supper. The sauce is thick and well-flavored, and went really well with the chicken and the roasted broccoli I had on the side.